It’s not a bit imposing and not so very fine,
It’s sort of like a mushroom, this rolling home of mine.
It never cares to settle down; it seems to want to roam,
There is dust from forty-seven states encrusted on its dome.
It’s stood the test of droughts, and floods and winds have lashed in vain,
While Old Jack Frost, in playful mood, has etched each window pane.
It’s stood in modest splendor in semi-tropic places,
And spread its valiant shelter in dwarfing mountain spaces.
Then seeking a place of silence (and more to the owner’s taste),
Its tiny stack has trailed its smoke across the desert’s waste.
It’s an errant home for a modern knight in search of the fabled fleece,
But its four small walls enclose within—comfort, cheer and peace. 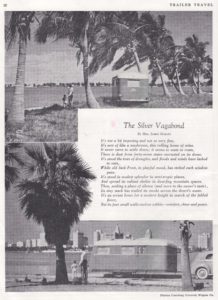